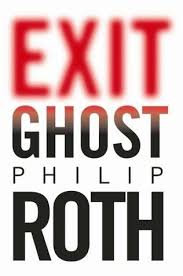 Philip Roth’s Exit Ghost is the latest (and possibly last) of his Nathan Zuckerman novels. Roth enthusiasts love to find the similarities between the fictional Zuckerman and real Roth and Roth appears to advocate that looking to close makes it so, “the essence of the artifact is lost.”

Nathan Zuckerman returns to New York city after living in the Massachusetts hills as a recluse for the past eleven years. His literary fame, early in his writing career, began with death threats in the form of post cards and forced his isolation. But a new procedure to improve his incontinence returns him to Manhattan where he rashly decides to swap his Berkshire cabin for a city apartment with a literary couple. Zuckerman becomes enraptured by the young woman, Jamie, besides the fact that he’s impotent due to prostate surgery.

I find Roth brilliant, but I won’t gush. It’s a great read. As are all of his novels. OK, I’ll stop now. But really you should read it.

One thought on “Exit Ghost by Philip Roth”