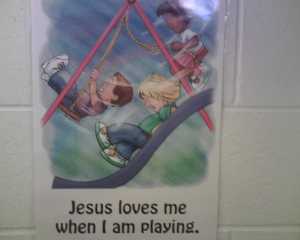 I saw this picture in the school bathroom and liked it. I liked it enough to take a picture of it which isn’t a smart thing to do. That is, taking pictures in a school bathroom. I’d advise against it, but I made sure the bathroom was empty.

I don’t like that the picture is sexist. Two girls and only one boy. But to that boy I’d say “Play on playa.” The picture is also racist. Two white kids and one black kid. There are no Asians, Middle Easterners, Aborigines, or Canadians included in the picture. The picture is also bourgeoisie propaganda. Do you know how many children in the world have a swing set to play on? Not many. So this is obviously a rich country like England or France.

Regardless of all that, the picture says that God loves us when we play, and that is often opposite of what church people say. There’s this hidden, subtle thinking error I see in many Christian that says if we aren’t constantly working and staying busy and going to church then we’re letting God down or we’re not pleasing him. They say things like fishing or sports or watching football are distractions and we should instead be going to church. And it’s true that those things can be a distraction but no more then something like church can be a distraction.

3 thoughts on “Why Playing is Biblical”