The movie The Big Year, which I viewed with my wife last night, reminded me of this. Jack Black plays a 36-year-old divorced bird watcher with a full-time job. He relies on his parents to fund his year of breaking a bird watching record. He’s befriended by Steve Martin’s character, who plays a successful businessman desiring to retire with his wife to a Colorado cabin she designed. He spends most of his time bird watching. Although Steve Martin’s character flies coach and sleeps in the cheap hotels, without him and his wealth (he does have a jet), the two character’s would be unable to view some of the rare birds on their list. One such bird they view in the mountains only by flying on a helicopter. Without his money the story faces an insurmountable obstacle and the reality of failure. Money provides more opportunities for success. 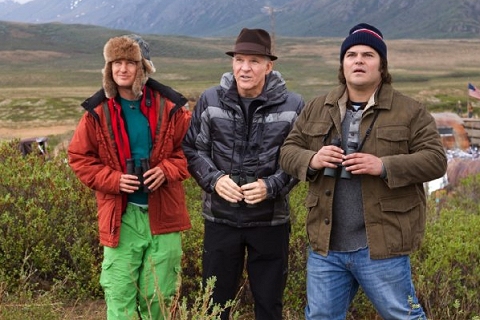 Stories (and movies) can do whatever they want. I’m not here to critique them or their characters or the income levels displayed. (The Big Year is a good movie.) But realistic poor people stories don’t offer wormholes with money because there isn’t any money (I’m not talking about rags to riches stories which are success based on materialism).

I wonder what kind of characters Tony Stark or Bruce Wayne become without a garage full of expensive sports cars and superhuman hero suits. I’m comparing realism to a form of wealth-fantasy (an entertaining-sometimes-dramatic-sometimes-comedic form of fantasy that is sometimes super fun to watch) that robs characters of humanity. It’s a subtle robbery, but one which sets us in a garage full of Lamborghinis rather than a meth-addict’s kitchen. Our humanity and immortality are implied in the meth-addict’s kitchen (maybe even amplified), while being softly nudged aside in the warehouse of state-of-the-art weaponry.

The societal status and income level of our characters matter. I’m of course using movie-character’s for the purpose of analyzing our fictional characters. What can we buy with fictional money? What new/exciting experience can be conjured through a thick wallet? Stories steeped in realism will have to ask these questions. What kind of scenes can we create in the absence of wealth? What’s unique when illuminating the poor?

Working with low-income characters might feel like a constraint after viewing so many Hollywood films. But it’s also an opportunity to return the reader to the concreteness of our earthy reality. While the pangs of hunger and unpaid bills feel can be made into a Goodwill-suit-type-cliche, it also offers a rich world of feeling and subtlety and unseen particularity pregnant with tension on the very basis of its poverty.

We fantasize about the luxuries of a billionaire’s jet and avoid the meth-addict’s kitchen. While both provide a glimpse into an unseen world the former is more inclusive than the latter. It’s easier to economically move down than it is to move up. It’s easier to simply walk into a meth addict’s kitchen (not recommended) than it is to wander into a billionaire’s jet (if you do send me pics).

Here’s a scene that requires little money, just some chemicals, a barrel, and some fancy know how. This is unique and easily accessible:

This is unique and exclusive:

The jet scene will serve its purpose, but only with the access of money (unless the jet is stolen). But anyone, rich or poor can walk across an open field and view barrels shooting into the air.

If Cinderella feeds young girls the lie of the prince who sweeps you off your feet and saves you, then the wealth-fantasy lies about the reality of justice. Justice does not come from a microchip-kevlar-caped suit, but rather through interpersonal conflict based and set (and needed) among the least of us, the neediest of us, the most vulnerable of us.

The real example of justice in Batman, The Dark Knight, is of the prisoner who chooses not to detonate the bomb on the other ferry in order to save himself. Batman can’t be Batman without Bruce Wayne’s wealth, but a prisoner can fight for justice with only lint in his pockets and a jumpsuit on his back. The scene, however, was used as a side-note to Bruce Wayne’s belief in the goodness of common people.

This is the allure of the movie Winter’s Bone, where Ree Dolly, a young girl providing for and protecting her poor family in the Ozark Mountain community, is neither glitzed nor glammed nor monetarily able to reach her end goal of finding her father to save the foreclosure of her family’s home.

Materialism used for good entertains us, but I’ll put stock into the bravery of the poor man or woman fighting for justice. That’s a story needing to be told. Super heroes, not in capes and suits and money-bought protection, but heroes in open fields and meth-addict’s kitchens, penniless and persevering.