It’s perhaps sad that I look for ways to maximize my reading efficiency, but I can’t keep up with everything I want to keep up with. I like making sense of the world through connections and ideas and stories. So I’m constantly reading, usually on my iPhone and MacBook, the news and blogs and articles and books.

Google just announced they’re shutting down Google Reader in 3 months. If you don’t know what that is it’s a magical tool that takes anything I want to read on the internet and puts it in one scrollable place. I don’t have to visit every website because every website comes to me. Magical, yes.

The Google Reader community is understandably pissed. Many bloggers will lose a chunk of their readership. I don’t know if anyone uses GR to read my blog, but if you do just switch over to Feedly on your favorite web browser and you’ll be good to go. I even got the app. I think it will be better than GR and it has a nicer looking design.

Other tools I use everyday and can’t do without in my reading/writing efficiency toolbox: Flipboard app for iPhone, Instapaper, and Evernote. If you want to shop around for RSS readers maybe sift through this reddit discussion with lots of links.

In the winter of 2009, a pond in Portland froze over and I spent three days down there skating around and playing pick up games. On one of those days I kept my phone in my pocket with RunKeeper tracking my movement through the GPS. This is the result: 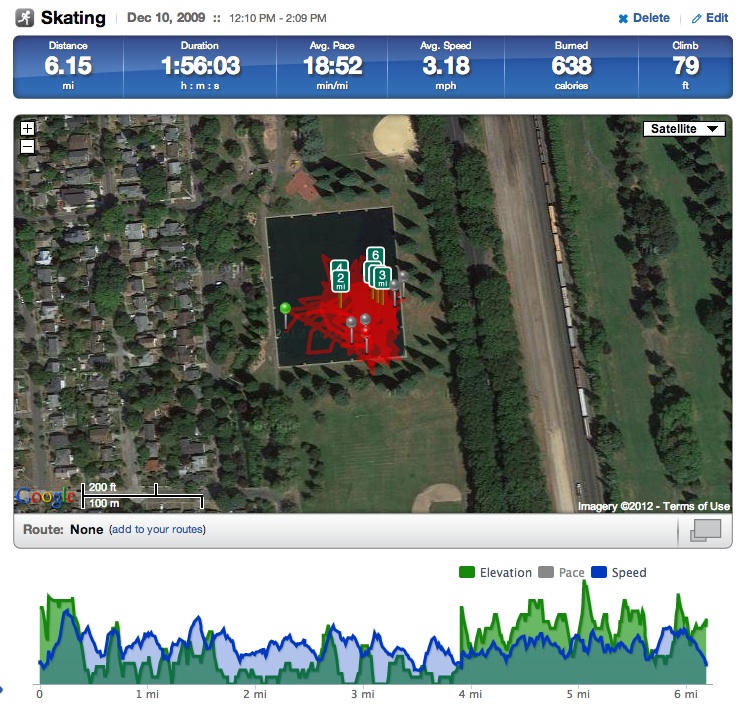 It didn’t give me any new or usable data, but I thought the idea of it was cool. I imagined what this kind of data could do if sensors were on all 40 hockey players during a game. But what if it didn’t just measure your speed, but your heart rate, pulse, recovery time, etc.?

My brother wears a high-tech watch that texts my mom whenever he’s having a seizure. These biosensors are starting to do more than just GPS or text, in some workplaces biosensors are used to help measure workers’ productivity and happiness.

They can be a precise, individualized indicator of the wearer’s health–monitoring sleep, exercise, calorie burning, degrees of hydration, mood, productivity, and social interaction.

What if technology could help identify how to best organize my daily routine to achieve flow in my creative and work life?

Or what if we put all these sensors on a bunch of hockey players? What could we learn amount movement, speed, location, vision, and position by using this  data when it relates to sports and athletics?

For myself, I imagine this sort of data telling me things about myself that I might not realize. Patterns or habits, bad and good, that might help me to improve areas of weakness.

MIT researcher Alex “Sandy” Pentland, a pioneer and proponent of behavioral biosensing and what he calls reality mining, says that “data mining is about finding patterns in digital stuff. I’m more interested specifically in finding patterns in humans.” It’s these patterns that are being used to evaluate and change individual and organizational behavior. (viaIEEE)

I’m interested when I hear rumors about Apple designing a watch. A watch is so old-school. And for Apple, just a glorified nano. But what if it could do more than play music and tell time on my wrist?

What if it could help me be a better writer by using the data it records to help me re-organize my life as to best achieve peak creative output:

In the workplace, one manifestation of being happy is your ability to achieve a state of full engagement, or “flow,”a term psychologist Mihaly Csikszentmihalyiat Claremont Graduate University, in California, coined to describe this phenomenon. When it happens, hours pass by like minutes, and you forget about outside worries.

Nearly everyone experiences flow at some point or another, including knowledge workers such as engineers and scientists, whose jobs require a great deal of focused creativity and problem solving. As it turns out, technology can help identify this cherished state of mind. (via IEEE)

It’s fun thinking about the possibilities, at least.